Being a carer can affect your mental health and money

Mental Health and Money Advice support carers who struggle both financially and mentally. We conducted a survey to find out how widespread this issue is and what is causing more carers to be affected by poor mental health and financial strain.

Mental health affected by caring for others

73% of the 400 carers surveyed told Mental Health and Money Advice that they had developed a mental health problem as a result of caring for someone – while 36% acknowledged that both their mental and physical health had been affected.

In addition, 84% have seen their personal relationships with friends/partners become more strained since becoming a carer.

70% of carers identified money worries as a source of stress. When caring for someone 54% said that their petrol costs were higher as they are the primary form of transport, while 28% pay rent and bills for the person they care for.

These increased costs have meant that 32%of carers have struggled on at least one occasion to pay an essential bill.

Mental health and financial problems are often closely linked. Concerns about money commonly cause increased stress and worry which, if left untreated, can develop into mental health problems like anxiety and depression. 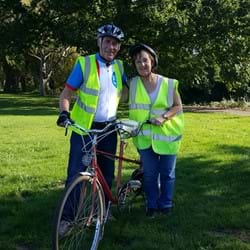 Paul had been married to his wife, Julie, for five years when she received a diagnosis of bipolar disorder. Find out how becoming his wife’s carer has impacted their lives financially and what they have done to turn this around.

What help is there for mental health carers?

Whilst there are specific benefits like the Carer’s Allowance, Carer’s Premium and Income Support/Universal Credit available, 33% of people said that they did not feel that it was worth the stress to apply, while 25% said that they had applied in the past and been rejected.

Alarmingly 29% of carers said they wouldn’t know where to find support if they needed it.

This survey highlights the difficulty mental health carers are finding themselves in; they want to help support the people they love, but that often comes at a cost to themselves, both financially and to their mental health.

Carers clearly need the correct support, and we recommend they read the following sections to support their own mental health and wellbeing:

You may find this other advice useful.

A High Court ruling found that the Personal Independence Payments (PIP) policy had discriminated against people with mental health conditions. We explain what the changes could mean for you.

Following the news that households face a record 54% increase in energy bills in 2022, we explain how to manage your mental health and money if you are worried about fuel poverty.

Sometimes when we’re struggling with mental health, it can affect our ability to manage finances. Find out how the Touco app can help you get better support around money and mental health.

Mental Health and Money Advice urged the Treasury to ensure the Breathing Space scheme from creditors captures everyone experiencing a mental health crisis and offers those at risk of reaching crisis point additional support.